You have successfully deleted an item.
Mount Allison University 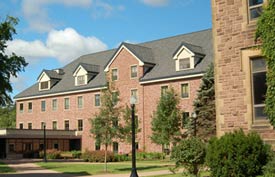 The range of extracurricular activity is one of the strongest attractors for students exploring Mount Allison and what makes life at Mount Allison so full of potential, excitement, possibility, and ultimately success. With over 140 clubs and societies, a full range of intramural and club sport programs, and lots of volunteer opportunities in the Town of Sackville, students can explore as many interests as they like.
New Brunswick Universities
Browse All